Opening at the south side of Sacramento Street between Leroy Place and Leavenworth, Golden Court is an herbaceous and splendid walkway that leads to ten or more living quarters. While its name may initially seem stock for a San Francisco street, its rather disturbing history is in fact tied to John and Ellen Golden who lived in a two-story cottage at its SE end for roughly 30 years in the latter half of the 19th century. 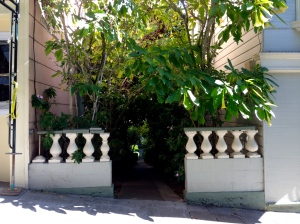 John Golden was born in County Cork, Ireland on June 3, 1840 and at a young age immigrated with his family to the Unites States where they settled in Massachusetts. Just before John’s 21st birthday, the Civil War broke out, and in the summer of 1864, John mustered into the 60th Regiment Massachusetts Infantry to support the Union effort. Strangely, his regiment spent the bulk of its service in Indianapolis, Ind. investigating rumors surrounding a South-sympathizing secret society known as the Knights of the Golden Circle. When Indiana Governor Oliver P. Morton commended them for their “good deportment and efficient service,” they mustered out on Nov. 30, 1864 without having engaged in a battle. Five months later the war came to an official close at Appomattox Court House in Virginia.

On June 24, 1866 John married Ellen McCarthy in Boston, Mass. and the following year they moved to San Francisco where John’s sister, Ellen Kelly, and her husband Lawrence, had moved before the war, establishing a homestead on the NE end of Leroy Place.* Four more brothers would follow John’s footsteps over the next ten years,^ but on John and Ellen’s arrival in S.F., it’s quite possible that Lawrence Kelly, who was working as a cartman and teamster, helped John get a job as a groom for Mayor Henry P. Coon‘s horses. In 1868, John and Ellen were living on Clay Street between Hyde and Leavenworth and John was appointed by the city as keeper of Washington Square Park in North Beach.+ Though John and Ellen possibly lived a spell on Bernard Street on Russian Hill as well, around 1873, John bought a building lot that was located 130 feet or so off the south side of Sacramento Street, between Leroy and Leavenworth. With its access point between two buildings on Sacramento Street, a pathway was instituted.@

Around this time John worked as a drayman for a boot-and-shoe company called Hobart, Wood & Co. as well as a lamplighter for the S.F. Gas Light Co., and in subsequent years would rotate work as a janitor, laborer, teamster/driver, and gardener. But despite whatever trade he was laboring at the time, John often drank to excess and grew violent. In January 1875 for instance John came home one night in a “beastly state of intoxication” and beat Ellen to a pulp with an oil lamp. Appearing in Police Court a few days later, Ellen’s face was still “frightfully disfigured with a pair of black eyes and a badly bruised nose.” During the trial a blood-covered lamp was produced as evidence by the prosecutor but Ellen refused to admit John used anything other than his fists, therefore reducing the charge to simple assault versus assault with a deadly weapon.#

In 1876 Ellen petitioned the city to officially name the walkway leading to their abode Golden Court,< and in 1878, the city directory listed 3 Golden Court as the Golden’s address. While Ellen would remain at John’s side for the next 25 years, John’s violence would persist. On October 1881 while Ellen was talking with the proprietress of a small bakery on Sacramento Street, John busted in, grabbed her by the right arm and threw her to the floor. When she got up and tried to escape to the back of the bakery, John shot at her with a pistol. While John missed, the disturbance attracted police and he was sent to the City Prison$ and charged with attempted murder.>

John returned to Ellen and 3 Golden Court, however, and in 1894 sustained an injury to his knee that limited his mobility.` It was also around this time the Goldens took on boarders in the ground floor of their cottage, therefore splitting the dwelling address into 3 and 3 1/2 Golden Court.= Soon after, on the evening of July the Fourth 1897, a fire broke out up the hill from 12 Leroy Place on Leroy’s SW side. Consuming various houses in what seemed a matter of minutes, a western wind whipped up and blew the fire toward Golden Court torching the Golden’s house just as a third alarm was sounded. At this point, the fire could be seen from all over the city, and after it burned the Golden’s house, it took down 1 Golden as well, a newly built three-story structure that housed three families. While no one died in the fire and various Sacramento Street homes would still suffer rear damage, firefighters soon extinguished the conflagration.

Though John and Ellen rebuilt their home with Lawrence Kelly’s assistance,% John’s self-destruction worsened, and on July 17, 1902 he held a pistol to his head and threatened to blow his brains out in front of Ellen. A few days later Ellen filed for divorce,- and though nothing ever came of it, less than a year later, on June 2, 1903, a day before his 63rd birthday, John died of alcohol poisoning.~

Ellen lived on to experience the 1906 Earthquake and Fire that again destroyed 3 Golden Court. In 1907 she sold the lot and in 1908 bought 332 Jules Avenue in the SW part of the city, south of Ocean Avenue, east of Lake Merced, in the neighborhood known today as Ingleside. Interestingly, in 1910, she gifted the Jules Avenue property to a woman named Margaret Twohig.* Ellen died on June 22, 1919 of injuries sustained from a broken hip. On June 24 she was interred next to John at Holy Cross Cemetery, out the Old Mission Road in San Mateo County.

* Though Leroy Place has different numbering now, my assumption is that 1 Leroy Place was originally at the NE end of Leroy, basically where the Jones Street Tank is today. After the Leroy Place fire of 1897, the numbering seems to have changed dramatically to where in Ellen Kelly’s obituary in 1902, her residence is listed as 124 Leroy Place. Referring to pre-earthquake Sanborn maps confirms this location of the Kelly house.

+ Daily Alta California. September 29, 1868. Perhaps a ripple from his connection with Mayor Coon, who was known for his efforts of city beautification and was the mayor responsible for hiring folks to survey the sandy Outside Lands that would become Golden Gate Park.

@ City directories from 1874-1876 list John’s dwelling as being at the rear of 1329 and 1331 Sacramento Street. The 1886 Sanborn Insurance Map (featured above) shows that originally 1329 Sacramento was the building east of Golden Court’s opening, and that 1331 was the building to the west. Today the buildings in these same spaces are 1375 and 1385 respectively.

$ The City Prison was located on the north side of Broadway Street, east of Pinckney Place (today Romolo Place), i.e. where Black Oak Books used to be, where the Beat Museum is today.

` In March 1894 John filed a claim for a Federal Pension in regard to his service with the Union Army stating he was now an invalid. His death certificate mentions an injury to the knee.

= Otto L. Smith and family lived on the lower floor in 1897. Otto was a barber at Joseph Goodman’s barbershop at 1531 Polk Street. In 1900, it was Criss and Grada Olsen, from Denmark. Criss worked as a steward.

% Daily Alta California, July 14, 1897. By this time Lawrence Kelly was a successful contractor, especially in regard to grading streets around the city.

~ Though I don’t know the exact day of John’s birth, his death certificate states he was “62 years, 11 months, 30 days.” Also, his death record states: “Septicemia Result of an injury to knee, Alcoholism.”

* San Francisco Call, Feb. 1, 1910. Also, though an article in the July 25, 1902 San Francisco Call says “they reside at 3 Golden court and have two children,” my guess is that this detail was simply bad journalism and that the writer mistakes their boarders for offspring. Though I’ve yet to locate Ellen’s obituary, John’s mentions no children, nor do any of the census records throughout their lives, etc. I am now fairly certain that Margaret Twohig was Ellen’s neice (to be updated later).